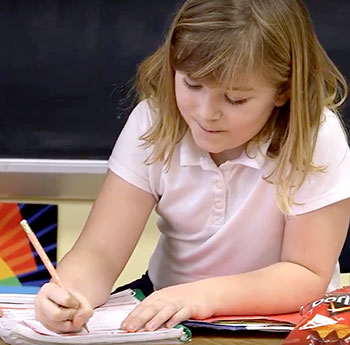 Early language acquisition develops naturally in the brain between birth and age 5, after which this language learning window begins to close. Skills such as speaking, listening, reading, and writing can be learned later in life. In contrast, language learning becomes an uphill effort the more time passes. Children who are D/HH often do not have full access to auditory information, which can make language acquisition challenging. Research indicates that using a visual signed language as a foundation increases literacy, language, and cognitive development in children who are D/HH (Baker, 2011). There is a common misconception about American Sign Language (ASL) impeding the learning of English. In fact, ASL benefits the learning of English and may increase cognitive and language development (Fisher, 2012). ASL and English are two different languages and using both is referred to as bilingualism.

Language is a complex system of symbols, vocabulary, structure, and grammar. Families may choose to combine languages. A language assessment performed by a speech language pathologist or American Sign Language (ASL) specialist is advised. A language assessment will provide vital data to design a plan for further language development.

Some language options include: